Three key goals of our mission are the following:

We frequently receive phone calls inquiring about child sexual abuse statistics,
questions about pending legislation in the Pennsylvania General Assembly and current law
regarding statute of limitations to bring lawsuits.

This page is designed to provide general information on these topics. 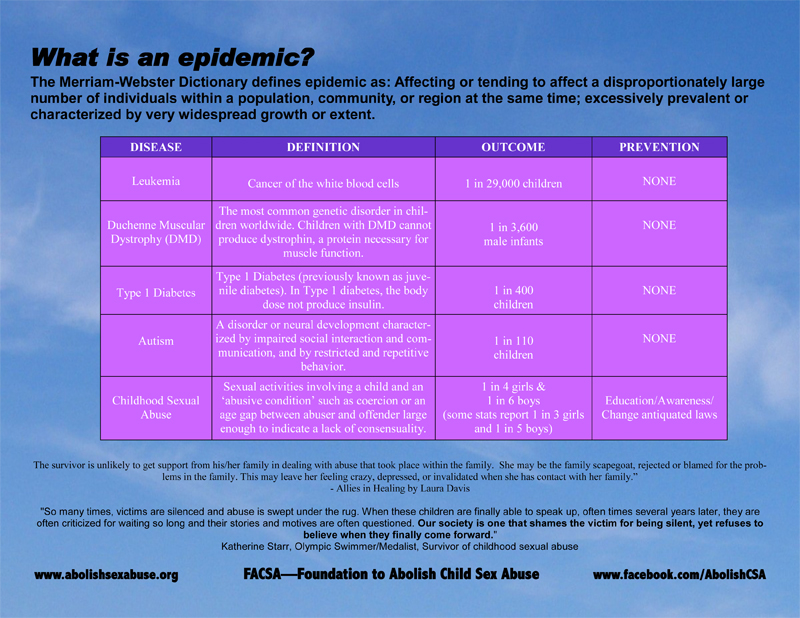 Pending legislation on statute of limitations

When an adult survivor discloses her/his abuse and begins her/his healing journey, the
question that often arises is: can criminal charges be filed against my abuser? Determining if the survivor is within the
statue of limitations can be confusing and somewhat daunting. The first step a survivor
needs to take to determine if a criminal lawsuit is possible is to call the District Attorney’s
Office in the County in which the abuse occurred. The DA determines whether to bring criminal charges and
whether the statute of limitations still allows time to file charges.

FAQs On Statute of Limitations in Child Abuse Cases

Q: How long does the Commonwealth now have to file criminal charges in a criminal
case involving child abuse?

A: In general the statute of limitations was extended in 2007 to give the Commonwealth
until the child victim’s 50th birthday, to file charges.

Q: What bill extended the statute of limitations in criminal
child abuse cases?

A: The statute of limitations was extended as part of a comprehensive
package of amendments to various statutes related to child abuse. The
amendment to 42 Pa.C.S.A. 5552(c)(3) is found in Act 179 of 2006
(formerly Senate Bill 1054).

Q: When does the change in the statute of limitations take effect?

Q: What criminal charges are covered?

A: As in prior law, the special statute of limitations for sexual
offenses committed against minors applies to the following charges:
rape, statutory sexual assault, aggravated indecent assault, indecent
assault, indecent exposure, incest, endangering the welfare of children,
corruption of minors, sexual abuse of children, sexual exploitation of children.

Q: What cases will benefit from passage of 2007 legislation to extend the statute of limitations?

A: The new statute of limitations applies to any case in which the
statute of limitations had not yet expired before the new law took effect.
Pursuant to Com. v. Harvey, 542 A.2d 1027 (Pa. Super. 1988), time for
prosecution may be extended by a legislative change if the prior period
has not yet expired. To determine whether the statute has expired, the
date of the victim’s 18th birthday is more important than the date of
the commission of the offense.

For cases involving child victims who turn 18 on or after August 27,
2002, the Commonwealth now has until the victim’s 50th birthday to
file criminal charges for abuse that occurred before the victim turned 18.

Current legislation before the Pennsylvania House of Representatives

State Representative Mark Rozzi introduced his H.B. 2067 that would suspend the civil statute of limitations for victims of child sexual abuse who have not yet reached 50 years old. The measure would allow victims the opportunity to seek civil recourse from their perpetrators and would permanently remove the civil and criminal statute of limitations involving child sexual abuse.

“It takes victims years if not decades to acknowledge the abuse. We need to give them the opportunity to seek justice and protect future generations of children by bringing action against perpetrators,” Rozzi said.

Presently PA House Bill 2067 is with the Pennsylvania House Judiciary Committee for review. Below is a list of the Representatives who serve on the Judiciary Committee and their contact information if you wish to express your support this Bill passing. You are also encouraged to contact your local Representative to express your support for these Bills as well.

As I See It: Legislation would aid abuse survivors
By Delilah Rumburg, Patriot-News Op-Ed – April 08, 2013

No warranties or guaranties whatsoever are made as to the accuracy, adequacy, completeness,
or applicability of the content, material, and information provided on this site. Every legal
issue must be evaluated on a case-by-case basis, and no two legal issues are exactly the same.
As the law changes rapidly, you shall not rely or act on any content, material, or information on this site.

Turning Point disclaims any responsibility and liability for any damages caused by any viruses
that may be contained within the electronic files of this site.

Any descriptions on this site of the results of any specific case or transaction shall not mean or
suggest that similar results will, can, or could be obtained in any other case. Every legal
matter is unique and subject to varying results.